The Greater London area consists of the 32 London boroughs which surround the City of London. It is very difficult to say with any certainty how many commuters there are travelling into and within the London Metropolitan Area. However, statistics from the city of London are very revealing. The population of this small area of one square mile swells from around 12,000 permanent inhabitants to 400,000 commuters during the working week.

Statistics from the Rail Delivery Group reveal that the number of train journeys every year has increased from 800 million in the 1990s to 1.6 billion in 2015. As well as trains, the 700 bus routes in London carry 1.8 billion passengers per year. These figures include both tourists and commuters, however.

Is it cheaper to live in London or commute?

London is the most expensive place to live in the UK for both tenants and homeowners. Rents are, on average, 2.5 times higher than the rest of the country while the average property price in London is £475,000 which is double that of a similar property in the south-east.

Even if employees find an affordable place to buy or rent in the capital, there’s no guarantee that it would be located within easy walking distance of their workplace so they still might have to pay commuting fares on top of the higher-priced accommodation. Apart from housing costs, other outgoings such as entertainment and insurance can also be more expensive in London compared to the rest of the UK.

The cost of commuting depends on how far you live outside the capital and whether you buy a season ticket. Bearing in mind recent train fare increases, annual rail passes cost on average £3,000-£5,000. To decide which is better for your personal circumstances, your housing costs should be at least this much cheaper to make it worth your while financially to move out of London.

Where could I live outside London and commute?

The Environs of Greater London encompasses all the boroughs which border Greater London. Towns such as Luton and Watford are the ones which used to be popular with commuters as they were located within 15-20 miles of Charing Cross. 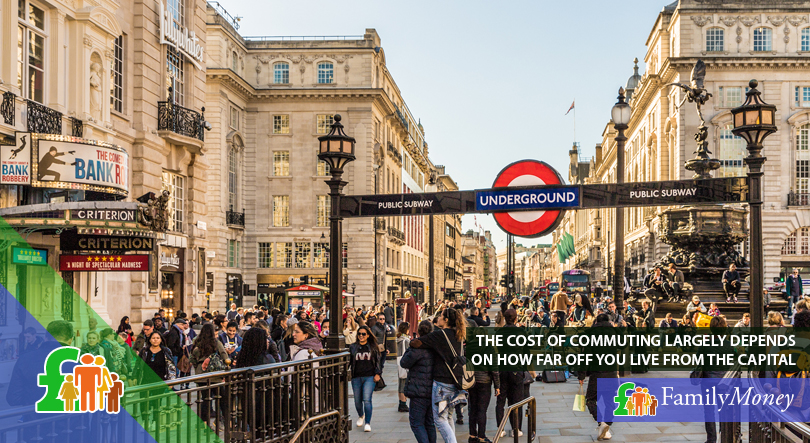 As means of transport became faster and since the completion of the M25 (1986), commuters tended to move further outside of the capital. The commuter belt refers to towns which are situated within a 40-mile radius of central London and includes towns like Maidstone, Reading and Aylesbury. As house rises affected these areas, an outer commuter belt has been identified encompassing towns like Hastings, Milton Keynes and Oxford which are within 55 miles of Charing Cross.

When looking for a place to live outside London within commuting distance, you should consider fares and the ease of the journey. For example, whether you’d need to change trains. You should also think about house/rental prices and the facilities in the town to narrow down your search even further.