For years now, this method of describing speeds has been controversial, and in some cases outright misleading. When consumers pay for an average speed of 20Mbps (megabits per second) and only receive as little as 5Mbps in the evening – when the entire neighbourhood is using the internet – it’s hard to argue that this isn’t at least somewhat unfair.

Fortunately, most Brits aren’t affected by sluggish evening speeds to the extent they once were. However, the issue remains – is there a better way of describing internet speeds that more accurately reflects what the household will receive?

Starting March 1 2019, Ofcom is introducing a new code of practice on broadband speed advertising. As a part of the new standard, telecommunications companies will be required to specify a “minimum guaranteed download speed” for new broadband deals sold – existing plans aren’t affected. Meaning, consumers who sign up to new deals after March 1 will now have better grounds to complain about sluggish speeds, because they know exactly what they’re supposed to be receiving at any given time of day.

However, although these new rules seem like a fantastic change from the point of view of everyday British families, it’s not a complete solution to the problem.

Ofcom’s new guidelines are only a voluntary code of conduct – they’re not legally-binding, so ISPs can choose whether or not to continue advertising average speeds, or begin talking about guaranteed minimums.

In saying this, the list of companies which have agreed to abide by the new code is reasonably impressive – it represents a large proportion of the UK consumer broadband market:

Notably though, Post Office Telephony and John Lewis have not yet signalled their intent, and may not sign on to the new code of conduct. However, the pressure to begin advertising minimum speeds will be immense, especially since most of the larger players have already agreed to do so.

How can I save some cash with the minimum speed guidelines?

These new minimum speed guidelines, if widely adopted, will be fantastic news for money-savvy consumers. If your plan expires after March 1, you should look to get a new deal with a guaranteed minimum speed. There are three main reasons for this. 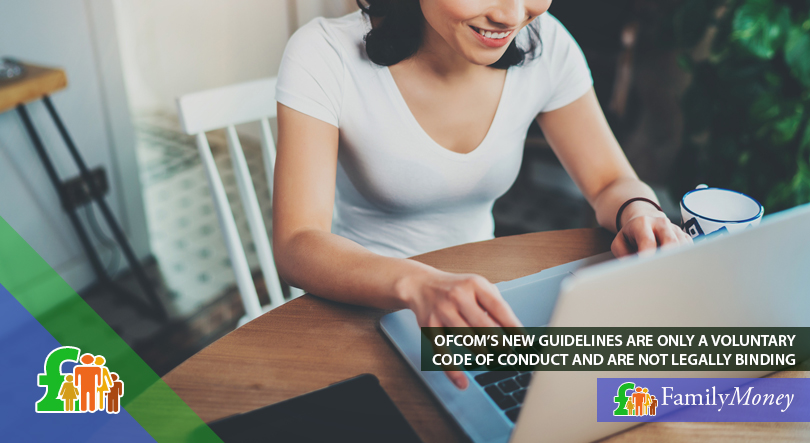 Firstly, it enables you to pick a plan which has just enough speed for your family’s needs – no more, no less – ensuring you don’t spend a penny more than you need to. For example, if your household of 2-3 people only does light web browsing, then getting a plan with a minimum of 5Mbps down as opposed to a deal with an “average speed” of around 10Mbps could save a significant amount of money.

Secondly, it makes it much easier to complain (either to the provider or Ofcom) when the quality of the service you’re getting isn’t up to scratch. You may be able to negotiate a discount in your monthly rate if the minimum speed isn’t being maintained, or get out of a contract without having to pay the cancellation fee.

Finally, it allows you to effortlessly compare the different plans on offer, empowering you to find the best deal in less time. No longer will you have to research the different ways in which an ISP defines an average speed, and find out the situations in which you have grounds to complain if your speeds are lower than expected.

Good, but not perfect

Ultimately, Ofcom’s new code of conduct is a step in the right direction – introducing minimum speed advertising should have been done years ago.

As a part of the new standard, telecommunications companies will be required to specify a “minimum guaranteed download speed” for new broadband deals sold.

Although the changes are great news for consumers, it remains to be seen what effect they will have on the consumer broadband market. It’s promising to see so many big names agree to the changes, but it would’ve been nice to see the new guidelines been made mandatory.

If some providers advertise minimum speeds while other stick to averages, this could lead to further confusion and greater difficulty for consumers in the long run.