The CMA calculate that £23 billion a year is spent on online purchases as a direct result of their reviews. We examine the growing problem of fake reviews with information and advice about:

Reviews and ratings have a great deal of influence on consumers’ online spending habits. In their recent research, the consumer watchdog ‘Which?’ found that 97% of people consulted them before deciding whether to purchase a product online. According to research carried out by the CMA (Competition & Markets Authority) in 2016, nearly a third of online shoppers bought a product purely based on its excellent reviews and ratings but were later disappointed. So how far should you trust these reviews to be objective? We look at what the investigation by ‘Which?’ discovered before looking at ways you can protect yourself. What are the telltale signs which reveal a review is misleading or less than impartial? Finally, we advise you on what to do if you suspect a review is fake.

Where do fake reviews come from?

There are two main ways that fake reviews and ratings are posted online. The first is that consumers are given a financial incentive to leave a good review. Perhaps they have received the product free of charge or heavily discounted in return for a 5-star rating and positive review. In their undercover investigation, employers of ‘Which?’ consumer protection group posed as buyers and received offers of free goods in exchange for a good rating. When they honestly gave the product a 2- or 3-star rating, they were told to delete it and were warned they wouldn’t receive their refund. 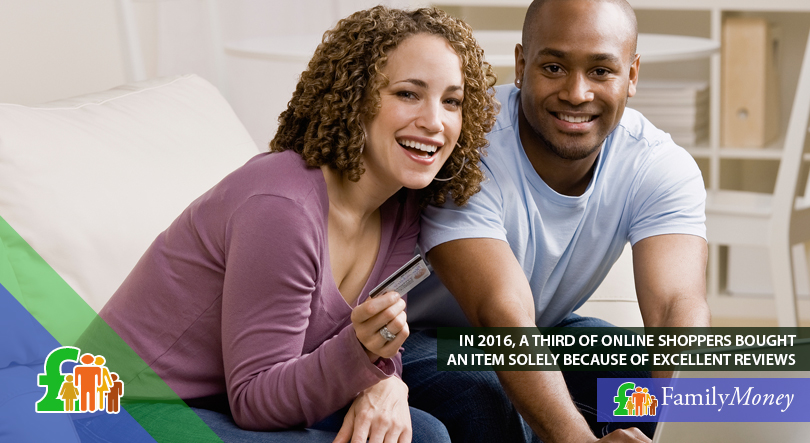 The other way that ratings and reviews are artificially inflated is that freelance writers are employed to ‘churn out’ false descriptions of their experience as a consumer. They are paid for every review that they write.

How can you spot a fake online review?

There are a number of signs that tell you that a review and the accompanying high rating is false. Let’s look at some of the warning signs to be on the lookout for.

Contents of the review

Instead of simply checking the product’s rating, you should examine the contents of the review in greater depth. Does it contain specific information about the product/service, or is the lack of verifiable details about it swamped by gross generalisations and superlatives such as ‘best ever’, ‘fantastic’ or ‘changed my life’? Such reviews certainly sound enthusiastic, but they lack basic facts.

You should also be wary of reviewers who mention formal product names and the model number. Genuine reviewers tend to assume you understand which product it is and don’t need to ensure that the review is picked up by search engines as fraudsters do.

Instead of looking at the highest and lowest rated reviews (both of which could be paid for by the seller or their rivals), you’re more likely to get an honest and genuine opinion from ratings which are in the middle (3 or 4 stars). After all, how often have you been completely satisfied or dissatisfied by a product or service? There’s often room for improvement whatever is being sold.

Style of the review

‘Review Mills’ are often located in areas where English isn’t the first language. Small spelling or grammatical mistakes don’t necessarily mean that it’s fake as many people do make typos when they’re writing. Instead, you should look at the overall style of the writing. Does it sound natural, or does it seem like it’s been written by a non-native speaker? Often fake reviews also contain capitals, unusual formatting and little or no punctuation.

Even if you fall victim to misleadingly high ratings, you don’t have to keep the sub-standard merchandise.

Also, be careful of reviewers who use technical and marketing jargon. This might be done by a freelance writer who has researched the topic but not by your average lay-person.

Many retailers will include a box which says that the review is from a verified purchase. This is confirmation that they have actually bought the goods from that site. Be more cautious if they haven’t done so. 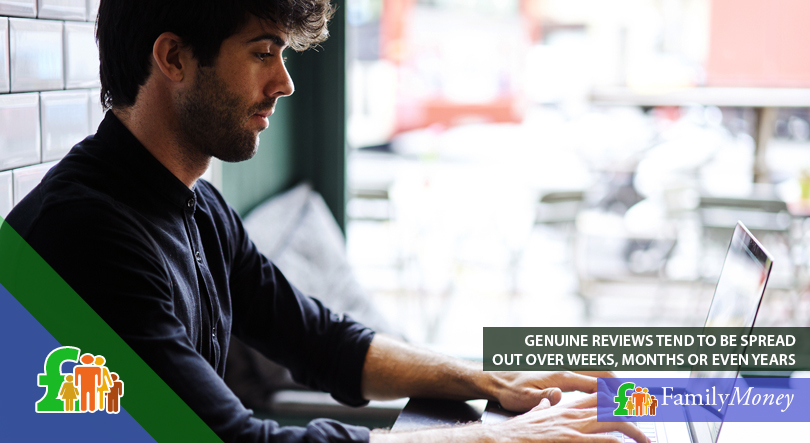 On many sites, you can click on the reviewer. Doing so will let you know their review history. Are they in the habit of only giving solely positive or solely negative reviews? This is often a sign that they’ve been paid to write the reviews. Also, consider the scope of the products/services they’re reviewing. Is it both possible and likely that they have purchased all the things they have reviewed (especially considering the geographical location of any in-person services)?

Timing of the reviews

Genuine reviews tend to be spread out over weeks, months or even years. However, paid reviewers tend to come in batches. If you see that many positive high-ranking reviews have been posted together, it’s often a sign that this has been done deliberately to take the spotlight away from an authentic negative review. The same is true of a batch of negative reviews which could have been paid for in order to bring down a rival’s overall rating.

Questions on online reviews and ratings

What percent of online reviews are fake?

As fake online reviews have become commonplace, you should be mindful that a fairly high percentage of online reviews generally fall into this category. It is estimated that approximately 15% of all online reviews, including those on major retailer websites, are fake. On some platforms, this percentage can be significantly higher.

How can you tell if online reviews are fake?

There are a few signs that can help you spot if an online review or rating is fake while you research products online. The timing of multiple reviews can appear suspicious if they were submitted at roughly the same time. The overuse of ‘I’ and ‘me’ as well as the use of many verbs can also indicate a false review. Phrase repetition and scene-setting are also signs of fake reviews. Generic profiles or profiles with no photos can be an indicator of a fake reviewer.

While fake reviews are not illegal, they are still considered an improper method of advertising. Especially in positive reviews, since there is no use of libel or slander, it is difficult to find anything legally wrong with what has been stated. Fake reviews can be considered false advertising in an indirect way.

According to the CMA, businesses which post fake reviews are in breach of the ‘unfair consumer practices’ element of the 2008 Consumer Protection from Unfair Trading Regulations. They can be subject to criminal and civil action. The problem, however, is that the sheer size of the internet (and all the information and sites it contains) makes it extremely difficult – if not impossible – to police.

What to do if you fall victim to a fake review

If you see a fake review or feel you’ve been deliberately misled by fake reviews, you should first of all report it to the site/marketplace where it has been posted. They have tools to check its veracity and if necessary, the power to have it removed.

If you’ve purchased something online and it hasn’t lived up to your expectations, your rights as a consumer are still protected. Legally, you have 14 days from the date you received it to notify the retailer of your dissatisfaction and another 14 days to return the product to them.

It goes without saying that the internet is a convenient and time-saving way of shopping and saving money. However, you should always make sure that you use your critical faculty when reading online reviews. Like profiles on social media or dating sites, it’s so easy to be fooled online. Even if you fall victim to misleadingly high ratings, you don’t have to keep the sub-standard merchandise. Your rights as a consumer are still protected even when you aren’t dealing with a bricks-and-mortar store so make sure you return the product and demand a refund.