As everyone starts looking forward to the summer and the chance to get away, we turn our attention to the question of complaints about flights. Whether it’s flight delays, cancellations or lost baggage, how much do you know about your rights and the complaints procedure? You’ll be able to read about:

In this article, we’ll look at what you’re entitled to when you have problems with a late flight or with your luggage, and how to complain. Finally, we look at aviation dispute resolution when you can’t reach agreement with the airline, and explain why consumer watchdogs have been critical of these schemes which were set up in 2015.

EU legislation for delayed and cancelled flights only covers aeroplanes which depart from, or arrive at EU (or some European non-EU) airports. For flights outside this region, affected passengers would have to contact that country’s aviation enforcement body.

The regulations don’t, however, cover ‘exceptional circumstances’. A delayed flight because of engine failure doesn’t count because it could have been prevented by maintenance. Instead, this clause covers anything which is out of the airline’s direct control such as strike action or civil unrest.

What are your rights about a delayed or cancelled flight?

Air passengers are entitled to due care and compensation for any flight which is delayed for longer than 3 hours. After 5 hours’ delay, they have the right to cancel their ticket, and receive a full refund.

The access to food and drink might be given in the form of vouchers rather than cash, and be distributed by airline staff. Sometimes the staff might ask the passengers to make their own arrangements. If this happens to you, you should jot down who said this, where and when. If necessary, ask the staff member to write this down on your booking as well. 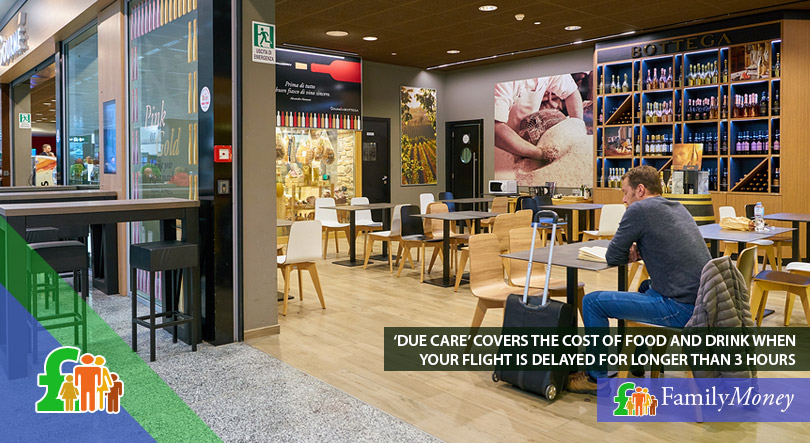 When incurring expenses for which you’ll later be repaid, it’s crucial that you keep receipts of all and every purchase to support your claim. Another point to bear in mind is that expenditure must be ‘reasonable’. In other words, they won’t pay out for expensive 5-star accommodation or alcohol.

What is the compensation for delayed or cancelled flights?

The amount of compensation for delayed or cancelled flights depends on the length of the flight. You’re entitled to (converted from the equivalent sums in euros):

You aren’t entitled to any financial losses for other arrangements you have made such as a discount on nights missed at your accommodation or money paid for a hire car.

If a delay causes you to miss a connecting flight, the airline only has to compensate you if both airlines are European operators.

If a delay causes you to miss a connecting flight, the airline only has to compensate you if both airlines are European operators even if the ticket was issued under the same booking reference number.

What are your rights regarding baggage problems?

There are fewer rules regarding damage, loss or delayed luggage on a flight. You might be entitled up to £1,000 in compensation but this is rarely awarded for two reasons. The first is that there are restrictions about the value of objects passengers can carry in unaccompanied luggage. The second is that airlines won’t pay ‘new for old’ replacements.

Although some airlines have a daily rate for delayed luggage, most will reimburse passengers for the bare essentials such as toiletries, etc. This amount will be less if they’re on the homeward bound leg of their journey since it’s assumed they’ll already have some replacement items at home.

How to complain about flights

Lost or damaged baggage must be reported on arrival at the airport. Passengers must fill in a Property Irregularity Report (PIR), and make a written claim to the airline within 7 days. 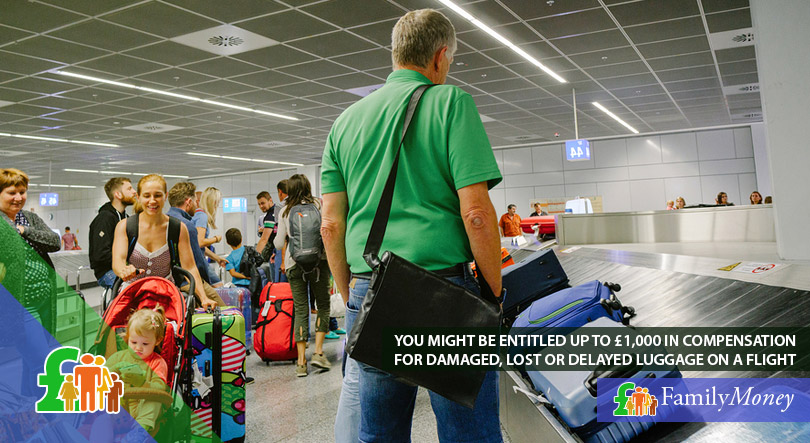 Although the UK consumer watchdog ‘Which?’ has been campaigning that compensation for late flights should be paid automatically, flight operators are resisting this idea. Therefore, you have to complain directly to the airline. They will have a claims procedure, and might have a standard form for you to complete and send off.

The refund and/or compensation will be sent to you by cheque. But what can you do if your claim is rejected even though you believe you’re eligible?

How do you challenge an airline’s rejection of a compensation claim?

Since 2015, there are now two private companies which specialise in dispute resolution for the aviation industry: the Retail Ombudsman of Aviation ADR (Alternative Dispute Resolution) and the CEDR (Centre for Effective Dispute Resolution). Each airline decides which private organisation to join. For the 20% of air carriers which have joined neither, complaints must go through the Passenger Advice & Complaints team of the CAA (Civil Aviation Authority). These organisations should settle disputes within 90 days, and their decision is legally binding.

What are the criticisms of aviation dispute resolution?

When the CAA set up two separate schemes to deal with complaints about the aviation industry, there was immediate criticism. As the two private companies were effectively competing against each other for the custom of airlines, it was said that airlines would naturally choose the company which favoured them more in its decisions.

How far has this criticism been justified in its first 2 years? CAA statistics reveal that both schemes have received 23,000 complaints. Of these over 11,000 (or over 76% of cases reviewed so far have resulted in decisions favourable to the consumer with partial or full compensation being awarded). However, it’s estimated that there are over 8,000 cases still waiting to be resolved.

The other criticism was that having two firms made it unnecessarily complicated for passengers who had to find out which company their airline had signed up with. If this information isn’t immediately obvious on the airline’s website, it discourages many passengers from pursuing their claim.

Until compensation for delayed flights becomes automatic, it’s important that air travellers know their rights. Delays, cancellations and misdirected luggage can all turn a much-needed getaway into a nightmare. In this case, it’s only fair that passengers receive the compensation they’re entitled to.