Although we might have a mental image of an industrialised urban Britain, in fact less than a third of all land is classified as urban. Britain still remains a predominantly rural country. In this article, we look at the cost of living in rural areas with information about:

Many Britons who live in a large city dream of escaping and buying a house in a picturesque village. We all know the statistics about the problems of city life such as the higher crime rates. But is it really cheaper to live in a rural setting? In this article, we first look at the salaries of those living in rural communities, the cost of rural housing and the inhabitants’ spending habits before considering other key areas where they might face higher prices in the form of a ‘rural premium’.

How much do people living in rural areas earn?

The problem of analysing the data is that increasingly villages located outside large cities become popular with the affluent moving out of the city to live. This internal migration has a knock-on effect on how much the ‘average’ villager earns, and of course how much housing is. Everyone talks about the high property prices in the capital, but what about rural areas?

The cost of rural housing

More internal migration of course pushes up the prices of property in villages. The Halifax Rural Housing Review found that across the whole of Britain rural property can cost nearly £43,000 or 20% more than housing in urban settings. There are regional differences, however, ranging from the highest (the West Midlands with 20%) to the lowest (10% more in the East of England and 11% higher in Wales).

For those villagers who can’t afford to buy property, there are much fewer properties for them to rent. The CPRE say that only 8% of housing in rural areas is affordable compared to 20% in British cities.

The 2017 ‘Family Spending in the UK’ report, published by the Office for National Statistics, found that although the average spend for a household was £547.40 a week, this covered a number of regional differences. Inhabitants of the capital and South-East spend over £600 while Britons in Scotland, Wales and the North-East spent up to a third less. 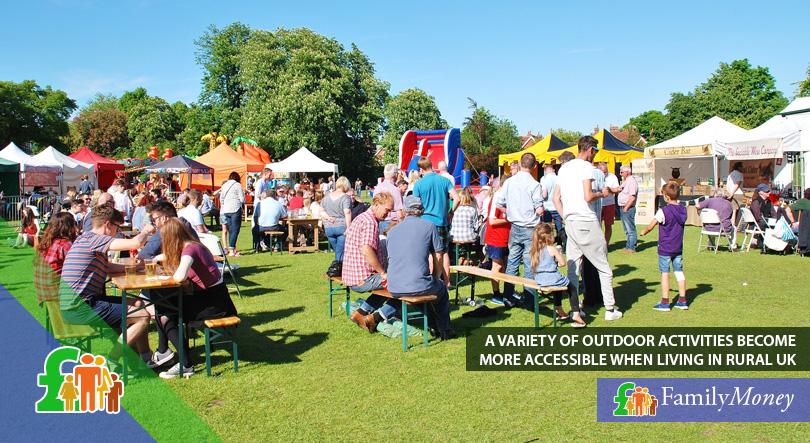 One way to see what financial habits are like is to check their access to credit facilities and overall indebtedness. The 2018 Financial Lives Survey by the FCA found that urban dwellers made greater use of high-cost credit facilities and had higher levels of indebtedness. On average inhabitants of urban areas owed £3,600 compared to £2,510 for those living in villages.

What is the ‘Rural Premium’?

Apart from housing, there are a number of other key areas where rural inhabitants tend to pay much more than their contemporaries living in British cities.

In the past decade bus services, especially to rural communities, have been slashed. According to the statistics from the Campaign for Better Transport, local authorities’ subsidisation of buses has been cut by 32% (excluding London) and 3,000 bus routes have been removed, many of which are the less profitable rural routes. This leaves inhabitants cut-off and isolated with less access to affordable shopping or even banking facilities.

They are faced with a stark choice – rely on the bus services which remain, pay extra for taxis or buy a car. Apart from the initial cost of purchasing a vehicle, they have to factor in all the associated costs of running a car from VED to insurance. And of course there’s the problem of increased petrol prices. Petrol stations in rural areas charge higher prices because they can’t take advantage of buying petrol in bulk at wholesale prices, and this cost is passed on to their customers.

A 2017 report calculated that rural communities paid on average 55% more on their energy bills. Part of the reason is that their older-on-average properties tend to be less energy-efficient. For instance, 20.6% of rural homes are awarded a F/G rating for energy efficiency compared to 2.8% of urban homes.

Another reason why they pay more is that they are often not connected to the gas mains because of their isolation and the cost of the infrastructure. As a result, they have to use more costly heating fuels.

Linked to the issue of heating is the lower levels of internet connectivity in rural communities. Of the adults in the UK who have never used the internet, 70% (or 3.7 million) live in rural areas (FCA statistics). This affects all aspects of their lives, but it’s especially true of financial services. From mobile banking to access to price comparison sites for switching utilities provider, this means they pay a great deal more than others with access.

Is it worth living in rural communities?

From a factual, financial viewpoint, the statistics reveal an emerging picture that is a little more complex than the idea we have of saving money by going to live in a village. Ultimately, the extra costs have to be weighed up against the undeniable benefits of country life. Greater freedom and a healthier environment are perhaps factors that don’t have a price tag.