Fewer and fewer British teens get a part-time or Saturday job. We examine this issue in depth with information and advice about:

Many parents had a part-time job when they were young, but the number of teens doing a Saturday job nowadays has fallen dramatically over the past 20 years. We look at what the statistics reveal before giving the possible reasons for this change. We consider the benefits of working while still in full-time secondary education – how can a part-time job help schoolchildren in the future? Finally, we stress the importance of teens working legally so that they aren’t exploited by their employers.

Changes in the numbers of pupils working

According to a 2015 report by the UKCES (UK Commission on Employment & Skills) entitled ‘Death of the Saturday Job’, the number of pupils holding down a part-time job has more than halved over the past 20 years. While 42% of schoolchildren had a job in 1997, only 18% of 16-17 year-olds now work on a part-time basis.

This trend shows no sign of slowing down. A Freedom of Information request to local authorities about the number of child employment permits issued showed that applications have fallen by a 1/5th over the past 5 years.

Why are fewer teens doing a part-time job?

The fact that fewer schoolchildren are working could be a result of changing consumer habits. In the past, many teens got their first experience of the world of work by holding down a paper round. However, the numbers of Britons who buy a paper has decreased because of access to news from 24-hour TV coverage or online sources. This has led to an inevitable drop in the number of newspapers delivered and the numbers of paper boys/girls who are hired. 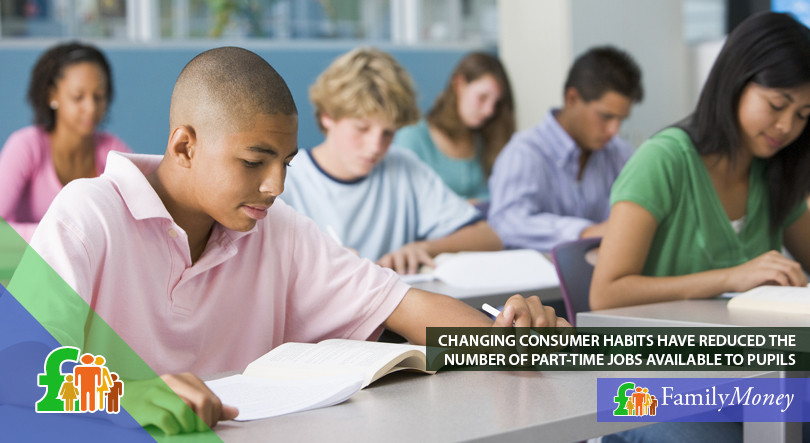 Another possible reason is because of the wage squeeze. With incomes falling in value, many adults are supplementing their income by doing a part-time job. They are therefore taking the job positions which have traditionally been filled by teenagers. It is quite possible that many pupils would like to work but are unable to find a job.

Finally, the overhaul of the secondary education system, especially the importance given to GCSEs and later A levels, has made parents reluctant to let their children work in case it jeopardises their future academic career. This emphasis on the negatives of part-time work is often reinforced by schools. Although many teachers and heads might seriously be putting the interests of the children first, there’s no doubt that others are thinking about how their poor performance in national exams would affect the school’s standing in academic tables. The question is whether part-time work is harmful or beneficial for their future?

How beneficial are part-time jobs for schoolchildren?

Part-time jobs for pupils are beneficial in a number of ways. Earning their own money for the very first time can give teens independence from their parents and a much-needed boost in self-confidence. It teaches them both financial responsibility and the true value of money. They’re much less likely to fritter their cash away when it’s money that they’ve earned for themselves.

Without any part-time experience, young people aren’t as well prepared for full-time work, and this negatively impacts their work performance and productivity.

This first experience of the workplace can stand them in good stead in the future. They will learn transferable skills which will come in handy for the rest of their lives. They learn how to communicate with people from many different walks of life – both their colleagues and customers. Working also teaches them important skills for their personal development such as how to handle responsibility, good time-keeping, resilience and finally how to manage their time and prioritise.

Far from hindering their admission to university, holding down a part-time job can boost their chances of being accepted. A 2016 survey of university admissions officers by ACS International Schools revealed that they gave equal weight to academic achievements and extracurricular activities including part-time work. They complained that 18-year-olds without any work experience tended to lack initiative. 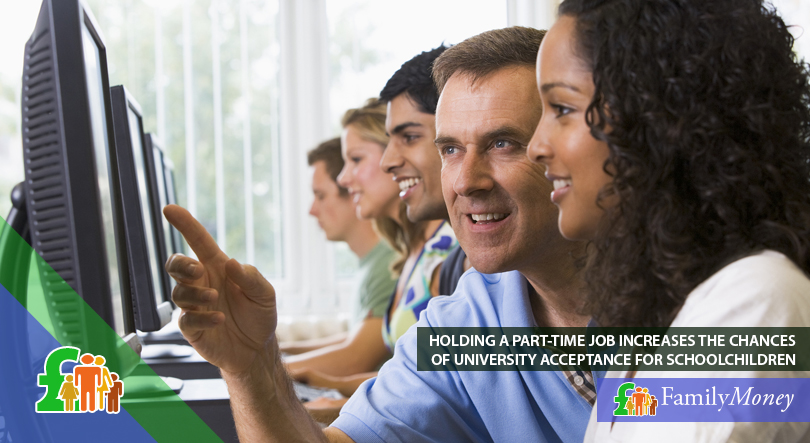 For undergraduates looking for work to support themselves during their degree, a Saturday job while at school gives them something to write on their CV and boosts their chances of being offered a job. A 2015 study by the UKCES showed that without any part-time experience, young people weren’t prepared for full-time work, and this had future negative implications for their work performance and productivity.

If teens do hold down a part-time job, it is imperative that they work legally and that their employers apply for a licence from their local authority. The National Network for Children in Employment & Entertainment plays a crucial role in drawing up guidelines and best work practices to prevent children being exploited. There are strict rules about how many hours they are allowed to work at each age and what types of jobs they’re allowed to do. The law also states that after their 16th birthday, they must be paid the National Minimum Wage.

There is no absolute answer to the question of whether a teenager should – or shouldn’t – have a part-time job since it depends on the child’s abilities and character. However, it’s apparent that working whilst still at secondary school has fewer negatives than is commonly expected. If your child expresses an interest in getting a part-time job, you should encourage them. It will soon become apparent if they’re able to deal with the pressure and if their school performance starts to suffer. They should at least be given the opportunity to try. It’s quite possible that you’ll be pleasantly surprised.