Most people are aware of the need to have a will in case they die but the vast majority have never considered what will happen to their digital assets in the event of their death.

In this article about what happens to your digital assets when you die, we shall examine:

You may think that you have your affairs in order for the event of your death, but are they really?

Financial provider, Royal London, has recently examined how ready people really are in today’s digital world for their demise. Their research found that only one in four people could honestly say that their relatives would easily be able to make sense of their financial situation in the event of their death.

One in four people could say that their relatives would easily be able to make sense of their financial situation in the event of their death.

One in ten admitted that their families would be in trouble if they died as their finances were not in order. Paper trails of our financial transactions no longer leave easy to follow clues for loved ones, who must try to make sense of a dead relation’s finances, as much of our lives are now conducted online.

Have you ever considered how many digital assets you have?

There is a broad range of things that may be classed as digital assets. These can be of some value such as bank accounts, PayPal accounts or trading accounts. Then there are loyalty card bonus points that have a monetary value. An online survey by TopCashback showed that 91% of people have no plans in place for their loyalty schemes and that 47% hadn’t considered these assets.

Sentimental emails, photographs and social media accounts are all things that need to be dealt with when a loved one passes away. There are more things on this list too, such as online gaming accounts, media stores and downloads that have been purchased. Many of these accounts can be lost after a person dies as in most cases no other person knows of their existence.

What happens to digital assets when a person dies?

Once the executors of the will have found the digital assets they may contact providers and financial institutions to close down their accounts. Then the balance of accounts or any other assets may be assigned to the beneficiaries, in the case of a will, or distributed according to intestacy rules when one had not been made.

The trouble is that most providers have a different rule book when it comes to death, although most will require a death certificate or a probate certificate before they act. The larger financial institutions in the banking world follow a guide drawn up in association with trade bodies that is a code of practice that they follow called the “Bereavement Guide”.

Can loyalty card points be passed on after the owner dies?

This depends on the provider as the agreement was with the original user. Most providers are happy to pass on loyalty points to relatives as long as they provide the documentation that they require to put their accounts in order. Some others will only pass them on to members of the same household or not at all. Many of the major providers such as Tesco, Boots, Nectar, Quidco and Cashback are willing to transfer points or cash in the event of a death. Avios, formerly known as Airmiles, do not transfer miles but they are willing to examine cases on an individual basis. 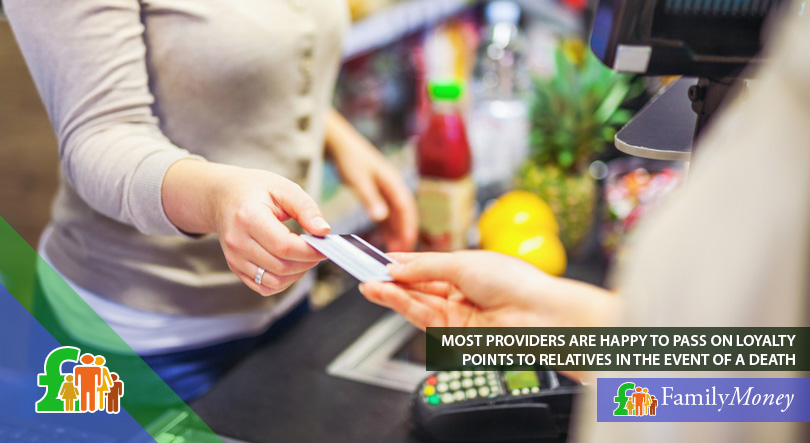 Should people make a separate document for their digital assets?

Financial experts recommend that people who wish to share their digital assets with their relatives should make a separate list of all their accounts and keep it with their will so that the executor of the will is able to carry out their wishes. This should be a list of the person’s digital accounts with the web address, their username and instructions for how they wish them to be dealt with. This is a living document that will need to be continuously updated, unlike a will which most people update every 10 years.

Financial experts recommend that people who wish to share their digital assets with their relatives should make a separate list of all their accounts and keep it with their will.

It is not advisable to write down the passwords as this may pose a security risk. There are online providers who can keep a list of passwords and usernames safe. Care needs to be taken as it is a criminal offence to log into a third party’s computer account under the Computer Misuse Act of 1990.

What can we conclude about what happens to your digital assets when you die?

It comes as a surprise in this digital world that we live in today that so few people have their digital affairs in order. It is hard enough for loved ones to deal with the affairs of the deceased in their time of bereavement and making it more difficult for them is something that would horrify most people when they realise that not having their affairs in order is such a problem. It is a pity that a lifetime of photographs and other items of sentimental value are increasingly stored online and could be lost as the owner may be the only one who knows of an account’s existence. We hope that our article makes you think a little about how well your affairs are in order.