Stricter eligibility criteria for state pensions in the UK mean that it’s more important than ever that stay-at-home parents claim their free pension credits. However, some face problems in claiming what they’re entitled to. We explain why with information about:

Many stay-at-home parents are missing out on free National Insurance state pension credits. This could reduce their state pension and make a difference between a comfortable and an impoverished retirement. This article addresses the issue with information about who is mainly affected by this problem, and how the current system of free NI pension credits is organised. We then explore what changes have been proposed to improve the administration of the scheme.

Any UK citizen who has stopped work to raise a child under the age of 12 is entitled to free NI credits to fill in any gaps in their employment history. Although this scheme is open to any stay-at-home parent, it predominantly affects women. According to the Office for National Statistics, there are 1,860,000 stay-at-home mums compared to 232,000 stay-at-home dads.

The ONS has already proved that taking time out to bring up children can have long-lasting consequences for women’s careers, promotion prospects, personal development and future earning power. However, it has now become apparent that it can also have an impact on the size of their future state pension. But how has this situation come about?

How has the overhaul of child benefit affected parents?

This problem has arisen since the changes to child benefit in 2013. Child benefit used to be paid automatically to all parents, but in this year it became means-tested. Only parents who earn under £50,000 a year are entitled to the full amount of £20.70 a week for the first child and £13.70 for each subsequent child.

Parents who earn between £50,000-£60,000 a year receive a portion of this amount while parents who exceed the threshold and earn over £60,000 will be penalised by a High Income Child Benefit Charge (HICBC). As a result, it isn’t worthwhile for them to make a claim for this state assistance as it results in a higher income tax bill.

Many parents who don’t wish to receive child benefit because of a higher income have neglected to complete the necessary documentation. Unfortunately, they have been unaware that not doing so has meant that HMRC has no record of them being a child’s primary caregiver. As a result, their NI record hasn’t been accredited with the supplementary credits to increase their contributions so as to be eligible for a state pension. 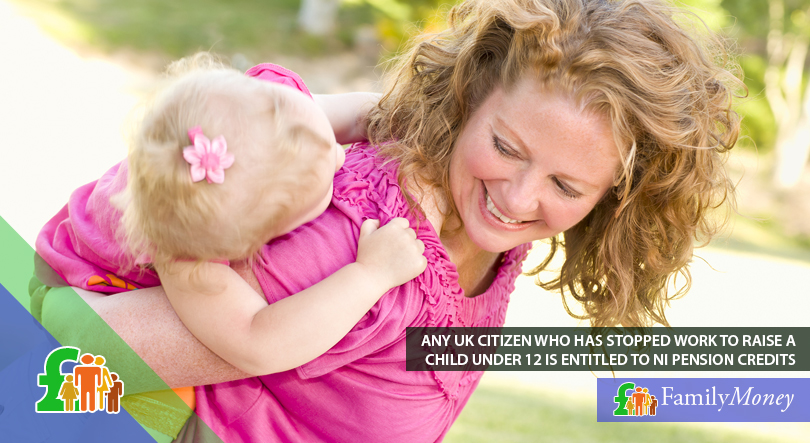 To make matters worse, the authorities aren’t prepared to amend their NI record even after stay-at-home parents realise their mistake. Applications can only be backdated by 3 months so some people (mainly women) could be missing out on years of pension credits.

Other parents have made mistakes in their documentation and registered the working parent as the recipient of child benefit and/or pension credit. Unfortunately, the free credits are useless for someone who is in work and paying regular NI contributions through the PAYE system. Even when they have tried to transfer the credits from the working to the non-working parent, they have been obstructed by HMRC or only received credits going back 3 months.

How to ensure all stay-at-home parents receive pension credits

This issue has received a great deal of media attention, and a number of proposals have been put forward to remedy the situation.

Changes to the application

Instead of parents having to fill in the form for child benefit and then opt in for pension credits, campaigners have suggested that the procedure is completely back-to-front. They argue that it would be more logical for all parents to apply for pension credits (available for all irrespective of their income), and then they could choose to opt in for child benefit if they’re eligible.

The government has also been criticised for not making sure that parents know about the issue of pension credits. Most parents are notified through forms for child benefit included in ‘bounty packs’ which are distributed at hospitals after the birth of a baby. Their presence among discount vouchers and leaflets are very easily overlooked at such a stressful time. 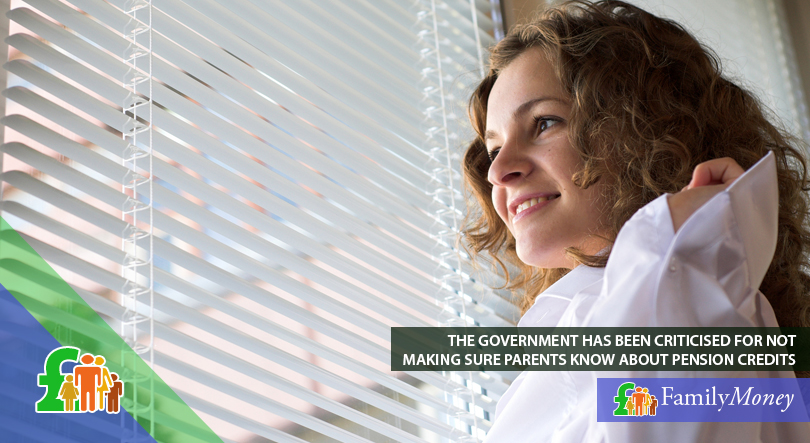 Instead of being notified in this way, critics say parents should be told about the issue when they register their child’s birth. They would be more likely to take the information in. Finally, they argue that the wording on information packs and websites should be made clearer.

The final change that should be made to the present system is that pension credits should be backdated to 2013 when the system changed. They point out that grandparents who are entitled to pension credits for looking after grandchildren can make backdated claims to 2011, so why should non-working parents be treated any differently?

How the state can help in other ways

A discussion about the specific issue of free pension credits naturally leads to other ways that the state can improve the situation for parents. Many stay-at-home mums feel that they have been forced to give up work because of the lack of affordable childcare options for children under the age of 3. They feel that more financial assistance from the government and higher statutory paternal leave would mean that free pension credits wouldn’t be necessary.

At a time when the government are concerned that all UK adults should have a workplace pension to supplement their state one, it seems ironic that the actions of the government itself are jeopardising many stay-at-home parents’ entitlement to a full state pension. Research by Age UK has revealed that women tend to have lower pensions than men. The number of single female pensioners living in poverty is 23% compared to 18% for single men. Unless something is done to change the present system for claiming free state pensions, this situation could get even worse in the future; even more women will struggle to get by in retirement despite devoting years to the raising of UK’s future citizens and taxpayers.